The BTS Meal received a wide range of responses from Indonesians, especially from the ARMY (BTS fanbase) and the Ojek Online community. As expected, the BTS Meal was trending for a few days on social media platforms and media portals. Unexpectedly, however, the campaign was trending for all the wrong reasons. To sum up the fiasco, listed below are three main things that McDonald’s should have done better in regards to the launch of The BTS Meal in Indonesia. 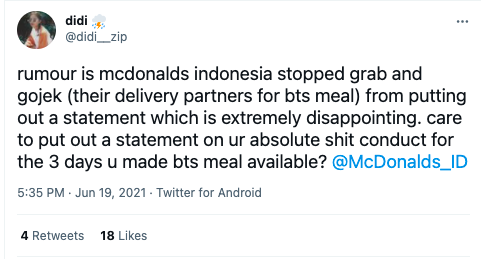 McDonald’s received a huge number of orders of the BTS meal on the day of the launch. By the thor day, McDonald’s had sold out all of its BTS meals, which left a lot of ARMYs and other customers disappointed and dumbfounded. How did that happen? Rumour has it that a selected McDonald’s outlets in Jakarta were to serve 1,000 meals for the month-long campaign. If this was true, McDonald’s Indonesia had shown that they did not have a good sense of the market, especially when it comes to getting a more accurate estimation of Indonesian customers who were interested in getting the BTS Meal. They should have done their research better before launching the campaign to better serve their target customers. 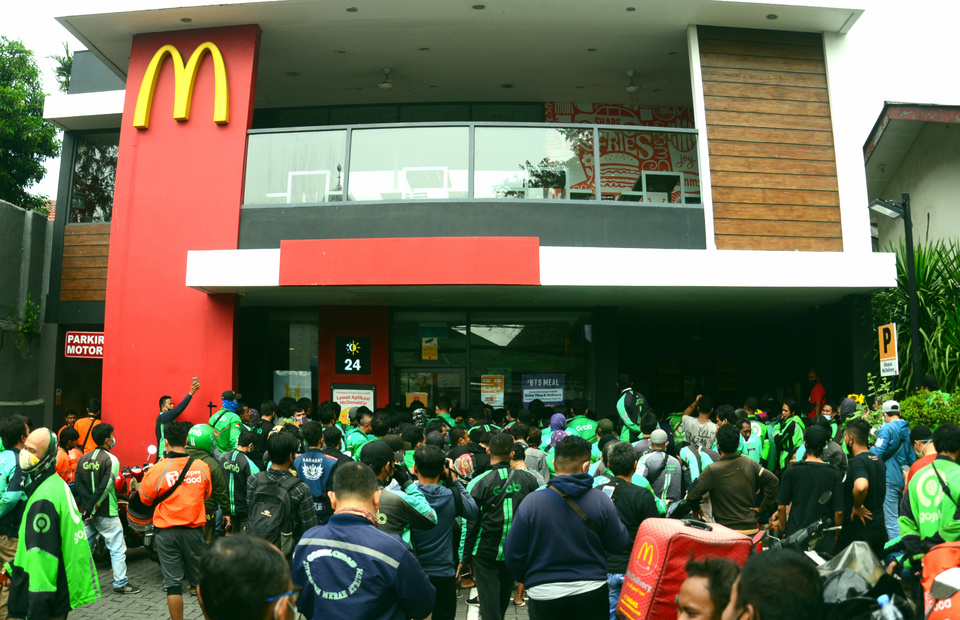 During the sales period, customers were not allowed to purchase The BTS Meal over the counter. Instead, they had to either use the drive thru service or meal pickup service such as Gojek or Grab. As a result, 20 McDonald’s outlets shut down due to a large crowd of ojek online drivers, which was against the government’s health and safety protocols. By then, we all thought that McDonald’s Indonesia would already have a better order system to support this particular campaign to avoid large crowd gathering, especially considering that this wasn’t the first time they encountered a similar issue.

In May 2020, McDonald’s Indonesia announced that they were going to close one of their first and most popular stores in Indonesia: McDonald Sarinah. News about the store closure prompted a spontaneous large gathering of a nostalgic crowd during the last few days of the store. This happened just a couple of months after Indonesia went into a lock down due to the Covid-19 pandemic. As pictures of the crowd in front of the store went viral, more and more concerned citizens complained about the serious health risks. As a result, 20 McDonald’s Indonesia outlets were shut down for 24 hours by the police.

Here is a simple idea for McDonald’s Indonesia, why not create a pre-order system where the only people who could take their order that day are the ones who already pre-ordered? That way, McDonald’s could serve the amount that they have decided and not cause a large crowd at the store. I mean, it should not be that difficult to do for a company that big. 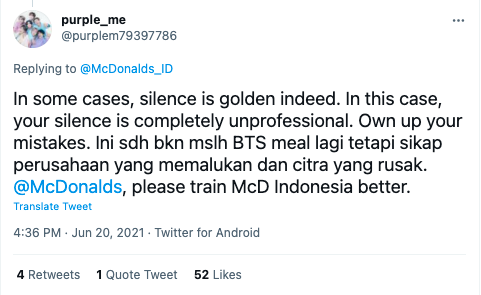 On top of the stock shortage and the zero consideration for the ongoing pandemic, McDonald’s Indonesia did a horrible job at communicating with their customers. There was little to no information provided by the company to keep their customers informed about the campaign. Despite efforts from hundreds of customers to reach out to the company on its official social media channels to check on the status of the campaign, no official updates were provided by the company.

After the temporary closure of 20 outlets in Jakarta, McDonald’s Indonesia spokesperson addressed the media, which could be a great opportunity for the company to come clean, to apologize for causing this fiasco, and maybe to provide an update on the campaign. It did not seem like the company did any of that. In an article written by the Jakarta Globe, McDonald’s Indonesia spokesperson said that customers don’t have to rush to purchase the BTS Meal since the campaign was going to last for a whole month. Yeah right. The meals were sold out the following day. This is the exact opposite of what you are supposed to do in PR.

While it’s not McDonald’s first time collaborating with celebrities to promote a meal, McDonald’s Indonesia is said to have failed during the launch of this meal. Before the BTS Meal, McDonald’s global have collaborated with Travis Scott with the ‘Cactus Jack’ meal and has grabbed the attention of many! The meal was a big success and people claimed that it was McDonald’s most popular meal set after the McJordan Meal.

Up until now, we still haven't seen any updates from McDonald’s Indonesia about the BTS Meal. As a global brand whose focus is on the customer’s satisfaction, McDonald’s Indonesia should address this issue and clarify to customers, especially ARMYs. If you were in McDonald’s position, what would you and what did you learn from this? Let’s discuss!