Are you familiar with the “Imagine” cover by Gal Gadot fiasco at the start of the pandemic? In 2020, when the world began to shut down from the newly found Coronavirus, Gal Gadot, along with other Hollywood stars like Natalie Portman, Zoe Kravitz, Will Ferrell, among others created a cover of the 1971 hit by John Lennon.

The video quickly received backlash from many internet users, saying that the act was tone deaf and insensitive, because these mega-celebrities sang lyrics like “Imagine no possessions, I wonder if you can” from the comfort of their mansions while people from around the globe suffered a social, health and economic crisis, and people thought it wasn’t what the world needed at the time.

Social media has truly changed how we do things and it’s proven countless times as a valuable tool to raise awareness on many causes and amplify voices of the unheard. Unfortunately, it’s a double-edged sword that created a harmful byproduct called “performative activism”.

According to Purewow.com, performative activism is supporting a cause or issue to garner attention, support or monetization from others rather than actually caring about making a difference in the cause. It’s more about showing how much you care about a certain issue and how woke you are, or an obsession to be seen, with little to no effort to genuinely learn, take action, or make the people affected by it as the forefront of the conversation. It is often associated with surface-level activism and some people also call it “slacktivism”. 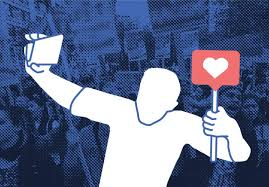 The term first appeared in Barbara Green’s book, “Spectacular Confessions: Autobiography, Performative Activism, and the Sites of Suffrage” in 1998. It rose to popularity in 2020 after the murder of George Floyd by a Minneapolis police officer where millions of Instagram users posted black squares on their feed for the “Blackout Tuesday” movement. It was a way to raise awareness of the violence and discrimination against the Black community. However, it caused more confusion and backlash for flooding feeds and making it difficult for people to find important information surrounding the issue.

So, the next question is how can we avoid performative activism? Or how do we actually make a positive change?

When posting about sensitive topics, it’s important that we don’t speak over people who are being affected by these issues, but instead, spend time amplifying and shining a light on their voices, while being mindful of our privilege and position at the same time.

Before pressing the “share” button, take the time to read about the issue, do your research on the communities and organizations that you’re working with. Ask yourself, what is the purpose of this social movement? Why is it important to post this on social media? Is there anything else that we can do aside from a simple retweet?

Other than posting your stance on social media, what else can you do? Perhaps you can volunteer to help the organization, donate, and so on. If you genuinely care about a cause, roll up your sleeves and make the effort to be more involved in helping these marginalized communities.

The line between performative and real activism can be blurry at times but there are steps we can take to avoid it. So, we need to eliminate this competition of being “woke” and engage in actual solidarity in a meaningful way, and the next time you see a movement blowing up on social media, take a step back and do your research before posting.